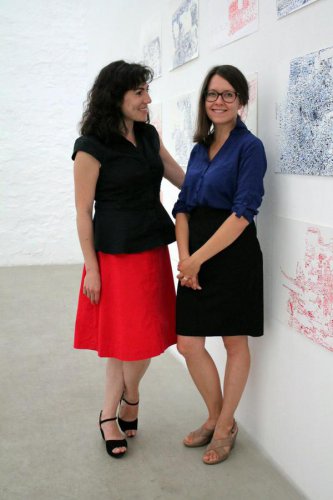 Бükü - bureau for cultural translations is an independent art space and curator collective based in Leipzig, Germany. Borrowing its name from a postcolonial thought and particularly from the concept by Homi K. Bhabha, it focuses on contemporary artistic positions from the Post-Soviet area with all its influences, differences and mutuality. Both members of the collective and founders of Бükü, Kristina Semenova and Olga Vostretsova, have theirs backgrounds in studies 'Cultures of the Curatorial' at the Academy of Visual Arts Leipzig.

Kristina Semenova worked in 2012-2015 as coordinator of artist residency LIA Leipzig International Art Programme loceted in Spinnerei and Olga Vostretsova worked 2012–2013 at the Museum of Contemporary Art Leipzig (GfZK) with the Grant for Young Curators from Eastern Europe. In 2013 they realized their first collaborative project. SPACE LAB - artist residency and exhibition in noninstitutionalized spaces - was dealing with historical space of former cotton mill Spinnerei in the West of Leipzig. They have developed a new map of Spinnerei based on the unknown, not recognized or forgotten memories around the industrial factory and showed site-specific art works developed by international artists from so-called Post-Soviet space.

Since then their curating practice is based on the cultural translation, which they see as a political practice, which exposes political borders as social constructions as well as shows the intertwining and interaction of many equal cultures. Since 2014 they run together the program of Бükü inviting artists as well as curators for residencies and artistic research to Leipzig and curate exhibitions abroad.